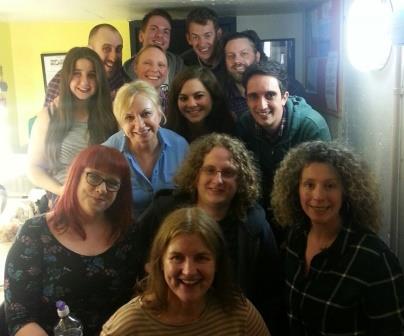 I could not be prouder of my brilliant and lovely Spring 2015 stand-up comedy course at Komedia Brighton fledgling comedians (above with Angela Barnes front left and Jill Edwards front centre and comedy giants scraping their heads on the dressing-room ceiling at the back!). They totally owned and lit-up the stage at Brighton's Komedia in their massively sold out "New Act Night" show last night!

My ace Komedia Brighton comedy course graduate Angela Barnes returned to MC again, celebrating six years since she was one of the fledgling comedians in my comedy class taking to the stage for the very first time in her New Act Night show. She's won awards and been all over our televisions since but she still remembers what it was like doing her first ever gig and she had some great tips for everyone who was about to go on stage hoping to follow in her footsteps. Angela was of course the perfect New Act Night MC and spoiled our lovely comedy fledglings with donuts and champagne (after the show!) as usual. 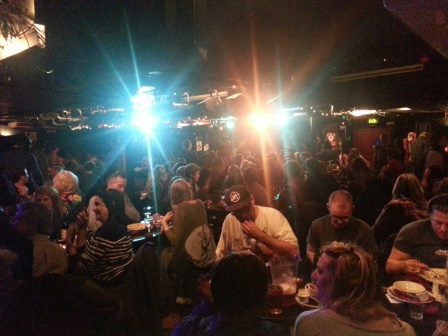 I took the photo (above) of the audience during the first interval in the show. I love that in this shot on the table front right are some of the comedy fledglings, now playing Comic Boom at Komedia and running their own local comedy venues, from my Spring 2014 comedy course New Act Night. Note - most are eating. Not something they were doing when they were about to go on stage at Komedia this time last year!

Our packed-in audience of three hundred was one of those perfect super supportive and very excited by it all audiences. The high energy atmosphere was electric. The newbie acts were all amazing. And the feedback from the show has been terrific. The applause at the end of the show was overwhelming. My Komedia Brighton stand-up comedy class of Spring 2015 left the venue on such a high. We all did! 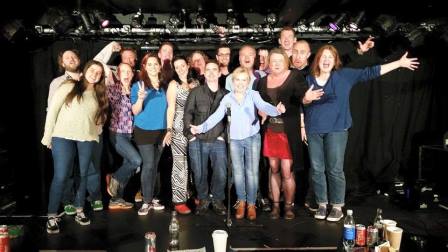 I can't wait to do it all again but this time with my Autumn 2015 Stand-Up Comedy Course at Komedia Brighton and the one week intensive version in July my One Week Comedy Course Summer Holiday. Exciting times!