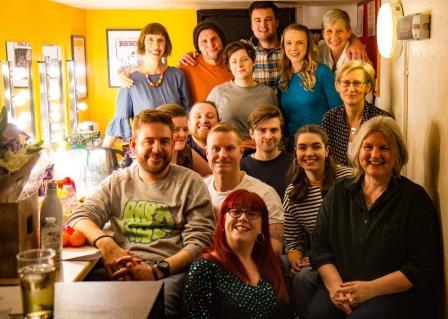 I'm so proud of these fantastic funny comedy fledglings from my Komedia Brighton stand-up comedy course. The class of Autumn 2019 took to the stage in our "New Act Night" show on Tuesday December 3rd and they just blew us all away. Each and every one of them was a stand-up debut to be very proud of, in front of a huge and wonderful audience of 230, in the Main Space at Brighton Komedia. And my award winning comedy class graduate television regular Angela Barnes came back to MC the show - again.

We totally spoilt our comedy class newbies as usual. My Advanced Comedy Workshop left a brilliant card and a carrier bag of sweets, chocolates and biscuits backstage for them. Angela gave them all individual cards, notepads, pens, chocolates and a mini bottle of Prosecco (for after the show). Our Komedia staff produced bowls of chips, cups of sweets and many, many jugs of water throughout the show. Our newbie comics were all feeling fully supported by everyone and very, very happy, which always makes me very happy.

My comedy class of Autumn 2019 have been a very happy group. They've worked hard and played harder going off to the pub after class on a Saturday and meeting up during the week to go to local comedy clubs. They've been a real pleasure to spend the last 12 Saturday afternoons with. I'm very much looking foward to doing it all over again for my Spring 2020 stand-up comedy course at Komedia Brighton.

I couldn't resist sharing this photograph of Angela Barnes with you all. It was taken at the "New Act Night" by our Comic Boom comedy club photographer the excellent James Ellis. We all love this photo. It's Angela "sassy face" Barnes.